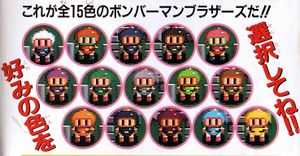 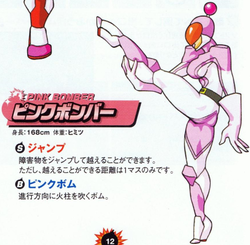 Pink Bomber (ピンクボン, pinkubon) is an alternate palette of Bomberman. Originally appearing as a minor male character, the character was recast as a female with a more significant role in later games.

Pink Bomber (ピンクボンバー, pinku bonbā) is part of a team of five Bombermen. Stripped of her power and transformed into a voxel Bomberman, she must fight back against the evil Waruwaru-dan, return to her original form, and destroy the enemy once and for all. In the Arrange Mode, her special skill is the Jump, which allows her to pass over one obstacle by moving forward two tiles, and her special bomb is the Pink Bomb, which issues an 8 tile column of fire in the forward direction. She is 168cm tall and her weight is kept secret.[2]

Pink (ピンクボン, pinkubon)[3] is a member of the Bomberman Brothers, one of eight protagonists in Super Bomberman R.

The third eldest of the eight Bomberman Bros., and the eldest girl.

The oldest sister of the 8 Bomberman Bros. Pink's nosiness is the stuff of legend. If someone she knoews is in a bind--well, even sometimes if they're not--no matter who, what, when, or where, she's there, sticking her nose into other peoples' business and try to solve everyone's problems herself. The words "privacy" and "sensitivity" are two missing entries from this bomber's dictionary.
- Super Bomberman R Online in-game text

Pink is first seen reading a book with her sister Aqua and asking for her opinion on her new hair clip, disregarding White's wishes to train. When White ushers the siblings to go and fight Buggler, she is more concerned that they haven't prepared any packed lunches for the trip.

On Planet Technopolis, she is completely unperturbed by Aqua's retaliation against Magnet Bomber and Red, being well-aware of her sister's violent streak.

On Planet Timbertree, Pink is the only sibling to notice that Yellow has wandered away, and brings the matter to White's attention.

On Planet Lalaland, she reminisces with Aqua about their fallen sister. When Karaoke Bomber teases Black, she comes to his defense. After the villain's retreat, she recognizes the necklace left behind as the same one she had previously given to her elder sister. Later, at the Black Hole, she expresses concern over Karaoke Bomber's fusion into Great Gattaida, and once she is freed, she is elated to discover that she is, in fact, Pretty Bomber. The two are seen singing together for an audience during the ending credits.

After the defeat of Buggler, Pink pines for a Ballom, the hot but rare new pet on Planet Bomber. She is overjoyed when White brings one home (Ballom-chan), but it quickly escapes in the ensuing Ballom riot. Although White hopes to save the city, Pink is more focused on securing the siblings' new pet. She eventually tracks Ballom-chan down to a warehouse owned by the company that imports Balloms, and innocently asks Smuggler if he has seen it the creature. In response to Smuggler's claim that he is not responsible for the riots, she agrees that his policy of intentionally keeping them scarce places the fault squarely on him.

Although Pink is typically one of the more mature siblings, she is not above squabbling with the other Bomberman Brothers over Ballom-chan or, in the later Grand Prix cutscene, the Vampire Killer memory cartridge. 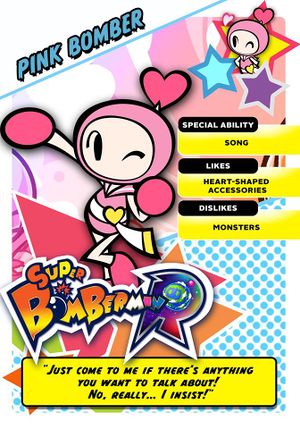 A promotional image shared on @officialbomberman on Facebook on February 24, 2017.

In Super Bomberman R, Pink has a set of default stats for Grand Prix Mode, but she can also be equipped with the memory cartridge of any other playable character, which will alter her stats to the stats of the selected character.

In the Shiny Edition of the PS4, Steam, and Xbox One versions of Super Bomberman R, available only via preorder, an alternate skin of this character, known as Shiny Pink (キラキラピンクボン, kirakira pinkubon? "Kirakira" is an onomatopoeia for glittering) is available. Once the included promotion code has been redeemed, she will be available at no Gem cost. She is functionally identical to the standard Pink.