Super Bomberman R (スーパーボンバーマン R Sūpābonbāman R) is a video game developed by Konami and HexaDrive for the launch of the Nintendo Switch. It is the first main entry in the Bomberman franchise to be developed after the dissolution of Hudson Soft. The game is a reboot both in terms of canon as well as being the first console Bomberman released in over ten years.

Later games set in this universe include Bomberman The Medal and Super Bomberman R Online.

On Planet Scrapheap, the evil Buggler appears and uses dark powers to revive five scrapped robotic life-forms, the Five Dastardly Bombers. He bids them to join him in a quest for revenge. Meanwhile, on Planet Bomber, the Bomberman Brothers are slacking off, despite their eldest brother White's insistence that they train diligently. They receive a transmission from Buggler, who states that his Buggler Army has taken over the five planes of the Starry Sky Solar System as part of his mission for galactic conquest, and insists that anyone who is brave enough to oppose him should come and face the Five Dastardly Bombers. White vows to defeat them, but he must force his apathetic siblings to come with him.

The Bomberman Brothers work their way from planet to planet toward the center of the solar system, defeating each Dastardly Bomber in combat and freeing the planets from their grip, overcoming their own limitations in the process. On Planet Scrapheap, Plasma Bomber tells them that his objective is to overthrow the organic life-forms who created them, because they treat them like garbage and discard them on a wasteland planet when they tire of them. However, after his defeat, he regains his former memories, and realizes that he and the other Dastardly Bombers had been brainwashed by Buggler when they were resurrected. Buggler arrives to goad the siblings into a final confrontation.

Following Buggler into space, the Bomberman Brothers discover that the galactic conquest mission was a distraction, as Buggler's true goal is to turn the Starry Sky Solar System's sun into a black hole capable of swallowing up the entire universe. He summons the unconscious Five Dastardly Bombers and fuses them into a giant robot to battle the siblings. When they are defeated, he himself grows to galactic proportions, forcing the Bomberman Brothers to fuse with the now clear-headed Dastardly Bombers in order to create a Bomberman large enough to rival the villain. Though Buggler is ultimately defeated, he swears that, having been born from the evil in the hearts of life-forms across the universe, he will always return.

Despite their victory, White's siblings continue to neglect their training after these events, much to White's chagrin. However, when a popular new pet on Planet Bomber, the Ballom, causes a mass disturbance, they spring back into action, tracking down the culprit and retrieving their own Ballom in the process.

One or two players may play cooperatively. Any character who has been unlocked for play can be selected in the Story Mode, including boss characters. Accessories may also be equipped, and all special abilities may be used as well. However, both players cannot select the same character. 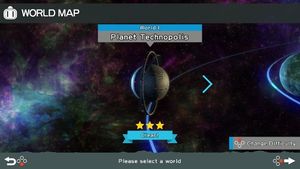 Super Bomberman R features a classic Bomberman survival battle experience in which the goal is to be the last player (or team) standing. Up to eight players may compete at the same time; an alternate variation of each battle stage exists for 4-player and 8-player matches. There are three options for the Battle Mode:[1]

In non-League Online Battles, players may gain or lose BP and gems by the following rules:

The PlayStation 4 version of the game does not support eight players in local mode,[3] so the Player option will not appear on the menu during local mode.

League Battles abide by a pre-defined rule set. Each battle is a 3 minute 2-4-player Battle Royale with 2 sets. Start position is fixed, Revenge Carts and Pressure Blocks are enabled, and Skulls and Special Abilities are disabled.

By winning matches, players may gain BP (experience points) and ascend the six leagues of the game. By winning games in higher leagues, players obtain more gems for use in the shop.

Some other factors also influence BP and G gain and loss:

The Grand Prix Battle Mode was added in update 2.0 on November 15, 2017.[2] This is a new two to six player team-based Battle Mode. For more information, please check the Grand Prix article. 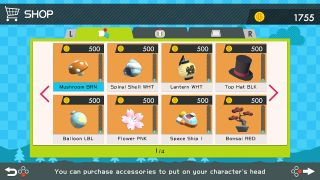 The first page of accessories in the shop.

In the shop, players may spend the gems they accumulate through playing the Story and Battle Modes in order to purchase accessories, playable characters, and Battle Mode stages, separated into three tabs. Some shop items appear at the beginning of the game, while others require certain unlock conditions to be met for them to become available to purchase. Purchasing a battle stage gives the player the ability to select that stage when playing locally or when hosting their own room.

The list of updates details all public information on the post-release development of the game.