Plasma Bomber (プラズマボンバー, purazumabonbā) is a recurring villain in the Bomberman series. 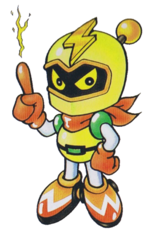 Plasma Bomber as he appears in Super Bomberman 2.

Plasma Bomber is the boss of stage 5-7 of the Dark Stage.[1] He constantly pursues Bomberman, throwing bombs and avoiding explosions. Like other enemy characters in the game, he takes direct damage from thrown bombs, and kicked bombs stop when hitting him. His stats are as follows:[2]

In stage 5-8, Plasma Bomber pilots the boss Skeleguard. Once his machine has been destroyed, he steps forward and extends his hand to Bomberman. Bomberman lets his guard down, but the mouth of Skeleguard opens and fires a bolt into Plasma Bomber's back, killing him. The machine then explodes to reveal G Ganzu. 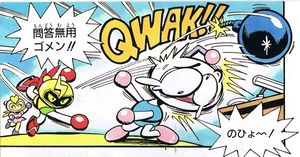 In the "Opening Comic" of the Super Bomberman 2 Hudson Official Guidebook, written and illustrated by Uorya Ohashi, Plasma Bomber leads to Five Dastardly Bombers to Bomberman's home on Earth. Calling Bomberman his brother, he tells him that they can return to their creator together. When Bomberman refuses to leave Earth, Plasma Bomber attacks and captures him instead.[2]

On board their spaceship, Pretty Bomber asks Plasma Bomber what the next step in their plan is. Plasma Bomber reveals that they will be taking Bomberman to the "boss's" place, subjecting him to mind control with the "brainwashing machine", and extracting from him all the information they need to conquer planet Earth. Pretty Bomber, however, takes matters into her own hands, and inadvertently releases Bomberman, who runs amuck and ends up killing Magnet Bomber. This angers Plasma Bomber, who declares that they're not brothers anymore, and swears they will kill Bomberman.[2] 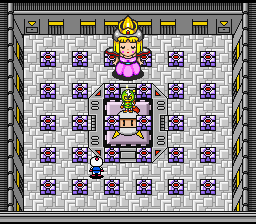 In Super Bomberman 3, Professor Buggler retrieves Plasma Bomber and his allies from the scraps of their ship on Earth and revives them aboard his spaceship. Plasma Bomber is sent to steal and scatter the pieces of the Mother Computer Chip on Yukiyuki Star. When White and Black Bomber restore the chip, he challenges them while piloting the mech Freezer Venus.[3] Upon his defeat, he escapes.

Back on Buggler's ship, Plasma Bomber fuses with the rest of the Five Dastardly Bombers to form Gattaider. However, they are defeated, breaking the transformation. He and his comrades are left behind in the exploding ship.

Plasma Bomber makes a non-canon cameo appearance as a Warp Bomber ( ワープボン, wāpubon) in some stages. In his original appearance, he simply strafes left and right while carrying a bomb. In later levels, he stays in place, warping from location to location. If he is hit by the B-Dama, the bomb he is carrying will explode, and he will disappear. The player must hit him at the correct time in order to create a chain of explosions that will clear the stage.[4]

The Five Dastardly Bombers return in Bomberman Tournament, attacking the planet Phantarion. It is revealed that they had attacked Phantarion at some point in the distant past, but were barely thwarted by a warrior who lived there. Upon their return, they attempted a revised variation of their previous attack, which worked. Dr. Ein sent MAX to answer the resulting distress call from the planet. However, MAX encountered Plasma Bomber in his Plasma Roc form at Plasma Base, and was defeated and captured.

Around a week later, Bomberman arrived on Phantarion, looking for MAX. He encountered Plasma Bomber at Plasma Base. Plasma Bomber fused with Pommy Dragon to form Plasma Roc, but was defeated and forced to escape.

The leader of the Dastardly Bombers, and the most powerful among them.

Plasma Bomber possesses the ability to release electrical bolts that can swiftly turn foes to toast. Despite being aligned with an evil and tyrannical army, he despises underhanded and cowardly measures, and wishes to defeat his enemies in fair contests of strength. This is especially so for White, who he respects as a rival.

Plasma Bomber is a robotic life-form who had been discarded and left for dead on Planet Scrapheap sometime in the past. Buggler arrives at the onset of the game's story, reviving him and the other Dastardly Bombers with his dark powers. Brainwashing them, he sends them to conquer the five planets of the Starry Sky Solar System. Plasma Bomber conquers Planet Scrapheap, preparing a battle arena in the case that the Bomberman Brothers make it to his lair.

When the Bomberman Brothers arrive on Planet Scrapheap, Plasma Bomber barely misses them with an electrical bolt attack. Impressed by their abilities, but still sure that he can defeat them, Plasma Bomber invites them to come and find him in the arena that he has set up, promising to answer any questions about his motives should they make it there. When they do make it there, White asks him why he has been conquering planets and hurting people. Plasma Bomber explains that the organic lifeforms do not care about robotic lifeforms, that they discard them like garbage when they lose interest, and that all robotic lifeforms should unite to overthrow and eliminate them. White disagrees, stating that his sole purpose is to protect the universe. Plasma Bomber finds this unreasonable, and battles the Bomberman Brothers in stage 5-9. He has at least three bombs and four firepower, uses Penetrating Bombs, and only takes one hit to defeat.

In stage 5-10, he engages the siblings while piloting Judge Gwinbee.

At the Black Hole, the unconscious Plasma Bomber is summoned by Buggler, who fuses him with the other Dastardly Bombers into Great Gattaida. Once the mech has been destroyed, Plasma Bomber arrives to help the Bomberman Brothers defeat Buggler by fusing into one giant Bomberman.

During the credits, he is seen standing with a child, wearing a uniform with a scarf more akin to that of his classic design.

Plasma Bomber's special ability is the Plasma Bomb (プラズマボム, purazuma bomu). This alternate bomb type has an adjustable fuse. The longer the player holds down the special ability button, the longer the fuse of the bomb will be, up to a maximum of 10 seconds. The bomb will only be placed on the field when the player releases the button. Originally, this bomb was not affected by Skull conditions, but as of update 2.2 on September 19, 2018, it is.[6] 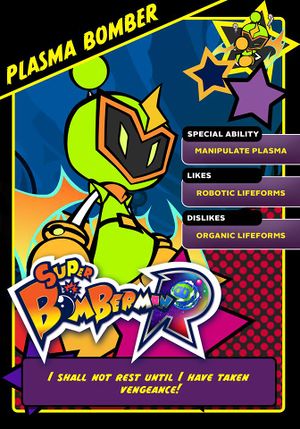 A promotional image shared on @officialbomberman on Facebook on February 21, 2017.

Plasma Bomber is unlocked in the shop when World 6 has been cleared on any difficulty setting.

Various merchandise of Plasma Bomber was produced during the 1990's:

Plasma Bomber was created through a contest by Nishida Akihiro, age 12, grade 6, of Kitakyushu, Fukuoka Prefecture, with three other entrants.[1]