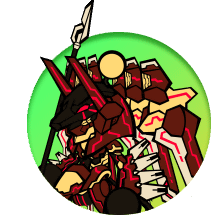 The most powerful Orbital Frame Bomberman in existence, said to possess capabilities far beyond those of the models that preceded her.

Like her twin sister, Jehuty Bomber, she was born on a space colony that orbits one of Jupiter's moons, and raised on Planet Anubis. She has been fitted with an artificial intelligence unit called "DELPHI," but doesn't really talk much.

In the introductory cinematic for Grand Prix mode, Anubis Bomber arrives on Planet Bomber alongside Pyramid Head Bomber and Dracula Bomber to judge the strength of the planet's representative competitors, the Bomberman Brothers. She attacks Red and Aqua before being stopped by Vic Viper Bomber, Simon Belmont Bomber, and Jehuty Bomber. 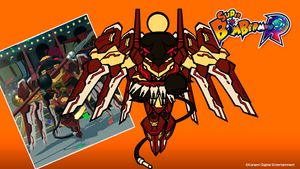 Promotional artwork released on September 21, 2017 on the @officialbomberman Facebook page.