Bomberman The Medal (ボンバーマン・ザ・メダル bonbāman za medaru) is a medal game developed by Konami and released exclusively in arcades across Japan. 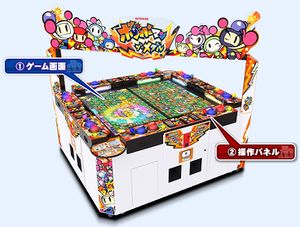 The game is set in a large table cabinet with eight control seats. Each seat plays as a different member of the Bomberman Brothers, introduced in the earlier title Super Bomberman R. As the game is constantly in motion, players may enter at any time - even characters who are not being played will still remain on the field. 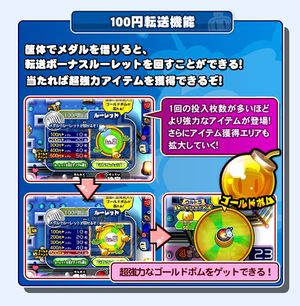 Paying coins and the bonus roulette.

A player enters the game by inserting one to five 100 yen coins at their chosen seat. They may then choose to exchange the coins for medals (15, 30, 45, 60, or 90, respectively) or play the bonus roulette. The number of medals inserted increases both the power of the items present on the roulette as well as the areas on the wheel where an item may be captured.[2] 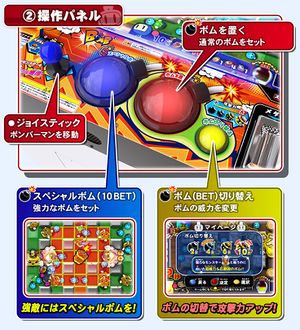 The game takes place on a large grid of hard blocks with scattered soft blocks. The map is full of wandering monsters. Each player may maneuver their Bomberman with a joystick. A large, blue, bomb-shaped button places a bomb, while a similar red button places a special bomb (if the player has one). A third, smaller, yellow button brings up a menu above the player character's head, allowing the player to select a different power for the normal bomb, from four options: 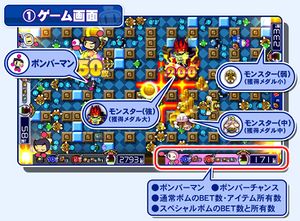 Because bombs cost medals to place, if the player has less than two medals, they are effectively out of the game.

When a bomb is placed on the field, its resulting fire range is illuminated on the floor. If a player is hit in an explosion, they will be temporarily stunned.

All eight Bomberman Brothers from Super Bomberman R are playable:

Monsters come in small, medium, and large varieties, and wander around the map in large quantities. When they are defeated by bomb blasts, light is sent into the responsible player's bin, or gauge. Once the gauge is filled, the Bomber Chance is called.[2] Players may pass through monsters without harm.

Some notable monster types include:[2]

Special Stages (スペシャルステージ, supesharu sutēji) are separate maps in which the players face off against a large boss character. When the boss is defeated, the players each recieve different shares of medals according to how much damage they personally dealt. Afterward, a special roulette chance occurs, which multiplies the players' shares by up to ten times.[2]

A traditional Battle Mode (バトルモード, batoru mōdo) is hidden in the game. Players face off, eliminating each other with bomb blasts. The surviving player is the winner.[2]

Items may be found on the map or through the Bomber Chance.

The Bomber Chance (ボンバーチャンス, bonbāchansu) randomly grants one of four prizes to the player:[2]

On February 2, 2019, new monsters, including a Golden Monster and a monster worth 500 medals, were added, as well as the following stages:[2]