Bomberman Online is a video game developed by Hudson Soft for the Dreamcast. It is the first Bomberman game to feature online multiplayer capabilities.

There is a small island on the southern sea of the planet Bomber, called "Quintet Island." Once every four years, a large-scaled Bomber Battle Festival is held on this island.

They call it the "BOMB-A-LYMPICS."

The Champion of the planet is decided for each of five Bomber Events, and the winner is given a Sacred Gold Medal.

...Deep inside the forest of the island, you see a sight of Bomberman training hard under the waterfall.

To prepare himself for the new battle...

"When one gains all Sacred Gold Medals, a way to Master Bomberman shall open."

Believing in the ancient legend of the island, Bomberman challenges 5 Champion Teams all by himself..."[1]

There are five stages in the Normal Game. Each stage contains four three areas, including a stage boss. The game plays out like the Battle Game, with each stage being assigned a different rule. Stages may be completed in any order.[1]

In this game, one of five different battle rules may be chosen.[1] 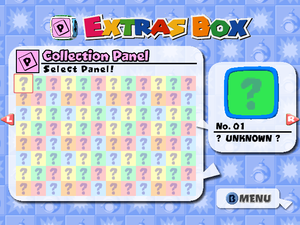 The list of Collection Panels at the onset of the game.

Although Bomberman Online was only released in the United States, the "Credits" page in the instruction booklet states:

"The following credits list the staff responsible for the localization, marketing and manual development for the U.S. version of Bomberman Online. Credits for the original development staff of the game are listed in the credits of the game itself."[1]

The development history of the game is currently unknown.