3-D Bomberman (三次元ボンバーマン Sanjigen bonbāman) is a video game developed by Hudson Soft. It is the first game to bear the Bomberman title. It was released exclusively in Japan on five different platforms. 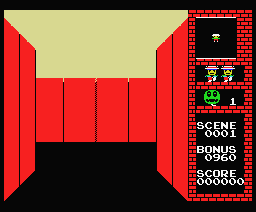 The beginning of the game.

Unlike its predecessor, 3-D Bomberman takes place in a faux 3-dimensional maze. The player is given a first-person perspective and can move forward or backward or turn with the arrow keys. Each step moves the player forward by one half of a tile space. A multitude of bombs can be placed with the space key. Bombs may be placed in the middle of a tile space or between two tile spaces, and up to five bombs can be on the field at once. Bombs are passable, and their explosions reach up to two tile spaces from the origin point. The player starts with three lives, and cannot obtain any more.

The game is played over a course of scenes. Each scene has a number of enemy characters that must be destroyed. The enemies appear as green balloons in the miniature map, but appear as large cubes with teeth in the 3D view. They relentlessly pursue the player. As the game progresses, in later scenes, enemies move faster and become more wary of bombs, actively avoiding them. Once all enemy characters are destroyed, the player automatically proceeds to the next scene. An exit in the form of a ladder may also be found hidden within a soft block in each scene, though using it will result in a lower high score.

A number of soft blocks appear in each scene. Unlike the previous game, soft blocks in 3-D Bomberman are visually identical to hard blocks. If a soft block is hit with the explosion of a bomb that has been placed between tile spaces, only half of the soft block will be destroyed. Neither enemies nor the player may pass through half of a soft block, but a bomb blast can pass through the open half, allowing for players to make attacks while maintaining a defensive barrier.

Points can be received by destroying enemies or by obtaining Bonuses. Bonuses appear as low walls of gold that may be found in some soft blocks. If a bonus is hit with a bomb blast, it will be destroyed and four enemies will spawn from it, which must be destroyed along with the original enemies in order to clear the stage.

The "bonus" stat, displayed on the right side of the screen, begins at a value of 1,000 for each scene and gradually diminishes in ten point increments during gameplay. When all enemy characters are destroyed, the remaining bonus total is added to the "score" stat. However, if the player uses an exit to escape to the next scene instead, the bonus is not granted. If the bonus stat reaches zero, all soft blocks on the map disappear, giving the enemies greater maneuverability. In this way, it functions as a timer.

In the upper-right corner of the screen is a map that displays the relative locations of the player, enemy characters, bombs, explosions, and the outer bounds of each scene. It does not display hard blocks or soft blocks. The size of the miniature map is five tile spaces wide and four tile spaces high, allowing the player to see up to two tile spaces to the left or right, and up to one and a half tile spaces above or below their current position.

This version includes a title screen depicting a cartoon of the protagonist running away from a balloon-shaped enemy. The 3-D viewport is slightly reduced in width, and the stat boxes are rearranged to allow the miniature map to be larger. The map displays larger sprites than those seen in the MSX version, and allows the player to see enemies and objects of importance up to three tile spaces away in any given direction.