Virtual Bomberman (バーチャルボンバーマン bācharu bonbāman) is an unreleased video game developed by Hudson Soft. It was slated for release on the Virtual Boy.

Who is this God Bomber who suddenly appeared!? After saving Bomber Nebula in the previous game, Bomberman was trying to take a moment of rest. But his hope was in vain, for suddenly the mysterious warrior God Bomber appeared. Is he a friend or a foe? God Bomber, with the ultimate beast machine god, brings a challenge of battle, but with a deep sadness in his eyes for reasons unclear. While some mysteries are left, once again a blazing battle commences. 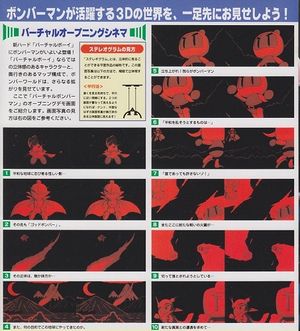 Virtual Bomberman was originally announced for a December 1995 release on the Virtual Boy console.[2] By the time it was unveiled at Famicom Space World '95, its release date was pushed back to February 29, 1996. Like many other Virtual Boy games at the time, it was quietly shelved when support for the console itself was ended, due to its overall failure in the market.

The only currently known source of information on this game comes from a flyer that was available at Famicom Space World '95. 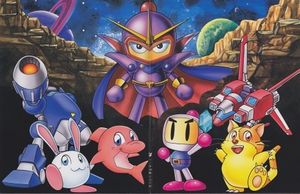 As depicted in screenshots, Virtual Bomberman was intended to be a traditional grid-based Bomberman game. Making use of the Virtual Boy's hardware, parallax stages and backgrounds and 3D characters would have appeared. Bomberman himself would have been given more personality, expressing a wide range of emotions to connect with the player.

The game would have featured two modes: the Normal Game and the Challenge Mode. In the Normal Game, each stage would have contained two floors. Bomberman would need to jump up and down between floors in order to pass obstacles such as ravines and possibly drop objects down. Each stage would also contain hidden points that would take Bomberman to a special Battle Game, in which he would fight God Bomber.

There were planned to be at least five stages in the Normal Game. Each stage would have contained an armour: Diibo, Rick, Lock-On Armor, Ninjirou, and Launcher Armor, in order. As detailed in the flyer, each of these armours would have been given a special ability and a charged ability. All of these abilities match the armours' powers as seen in the later game Bomberman World.

In the Challenge Mode, the goal would be to clear a specific stage within a time limit (given a choice between a 2- or 5-minute mode) while getting the highest score possible. Then, the player would be given a rank, from "idiot bomber" to "god bomber". No other details on this mode are given.

Many elements present in the previews of Virtual Bomberman later made appearances in the PlayStation game Bomberman World.

Although the game was never released, a keshi of God Bomber was released.