Panic Bomber (とびだせ！ぱにボン tobidase! panibon, jump out! Panibon), is a video game developed by Hudson Soft. It is the fifth release in the Panic Bomber series and the only Bomberman game to be released on the Virtual Boy.

NARRATION: On Noinoi Island, always shrouded in fog, there lies a Golden Bomberman Statue. Many adventurers have set out in search of it, but have never returned...

BOMBERMAN: "The one who gets the 3 medals that sleep on the island will be worthy of taking the Golden Bomberman Statue"... Lets go!! To Noinoi Island!

BOMBPIRE: Kukkukku, it has been many decades since we've had a visitor on this fearsome "cursed island". I'll never let you leave this place alive, Bomberman! Hahahahaha!

NARRATION: You must get the Golden Bomberman Statue!

The dark island of Ever-Mist is permanently enshrouded in a deep, dreary fog. Many adventurers have traveled there in quest of the legendary Golden Statue of Bomberman, but none have returned...

The legend states, "He or she who gathers together the three celestial medals of power, which lie on the island of Ever-Mist, shall open the gates and gain access to the statue."

Learning this, Bomberman sets off on another great adventure![2]

This is a standard Panic Bomber game. Only one player may play, and there is only one mode, which follows the story.

These items take up space on the player's field:[1]

When enabled, instead of Burned Bombers, Blocks will appear during boss battles. Destroyed blocks can release Skull effects. The following effects are possible:[1]

The game is divided into four areas. Each of the first three areas includes two normal enemies and a boss character.[1] Defeating the boss character earns Bomberman one of the three medals. The final area contains the final bosses.

If enabled, the "automatic pause function" will trigger after the player defeats each of the first three bosses.

Panic Bomber uses a 4-digit password system. A password is given after each boss is defeated, allowing the player to resume at the beginning of the next area.[2] Each difficulty mode has its own set of passwords.

A demonstration and explanation of the game's rules can be viewed through this menu option.[2] 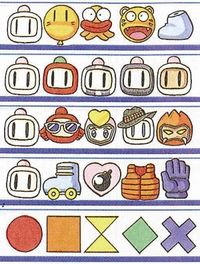 Character sets as depicted in the manual.

Labeled "Blocks" in the U.S. release, this menu allows the player to choose from one of five different sets of characters for the Bomberman items.[1][2] Because the game is displayed in monochrome, most of the sets rely on different shapes rather than different colours. 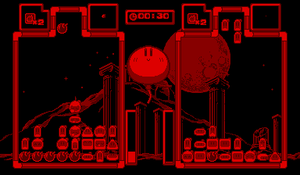 A sixth set, depicting Bomberman heads in various shapes, can be chosen from the game's locked debug menu, but does not appear to be unlockable in the final release.[3]

When the player erases characters from the field, other items fall to fill any gaps. This can create chains of erasures. When the player makes a chain of five or more, a Special Event? スペシャルイベント, supesharu ibento will occur, clearing the player's field and generating large amounts of bombs.[1] The following events are possible:

When Tobidase! Panibon was localized for its U.S. release, a number of changes were made: